School choice as told by Fran Cusworth from an article in The Monthly. 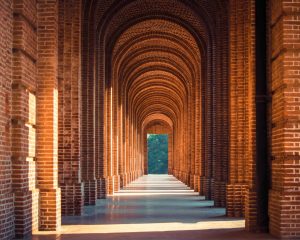 It’s a weekday morning and I’m being serenaded with a Bach string sonata by two senior students, in one of Melbourne’s better private schools. In the process of choosing a school for my 12-year-old son, I have turned up – along with about 300 others – to take a tour. Sun falls through arched windows onto the crimson carpet, original artwork hangs on the walls, and a grand piano (one of ten in the school) sits open in the corner. I’m juggling a cup and saucer, as well as nine separate full-colour brochures, one that runs to 45 pages. These detail the school’s features: a cattle station campus in the outback, a Year 9 residential campus in country Victoria, alumni who include two former prime ministers, 13 Rhodes scholars and five serving Supreme Court judges. I’m starting to wish I hadn’t worn thongs.

The principal thanks the students, who are leaving for their European music camp first thing the next day. “Welcome to everyone, and especially the OPs!” he says, beaming.

“OPs will remember this room well,” he says, almost winking. A few parents stare into their cups. Ex-students, or Old Privatonians, let’s call them, are special to this school. They will find some things unchanged, some different, he says, and the OPs nod. He tells a story of an OP who was in town with nowhere to stay, until the OP network found him a bed. I am not an OP, but one day my son could be, for $32,000 a year, or less if he won a scholarship.

Right now, in the school-shopping season, 11- and 12-year-olds are doing weekend coaching classes in preparation for entry exams, while their parents circle schools in group tours – good marks and good values on their shopping lists. It’s not what I remember from Year 6.

For the tour we break into small groups, each led by a senior teacher and two students. We shuffle past self-conscious classrooms-in-action, through walkways and sandstone arches, and alongside groomed garden beds and swathes of cushiony green grass. It seems quiet for a school; noise sinks into carpet and soft surfaces. There’s just the rattle of flags on flagpoles, the hum of a ride-on lawnmower and the click of high heels. Every wall or staircase seems to bear a plaque: the Smythe-Hamilton Wing, the Grange-Newton Library, the 1919 stairway to honour OPs who died in the war. I wonder whether my children will ever leave some legacy in a school, maybe the Cusworth Drinking Fountain.

“It’s not every school that has a museum,” our guide says, as we pass through a wood-panelled room lined with spotlit glass cabinets. Holding what – medals? Prime ministerial school ties? But we are raced along to visit a steamy indoor pool, where boys play water polo, and a library lined with screens: largesse funded by private fees but also by taxpayers’ dollars. At the music department we learn that school ensembles play at the prestigious 2466-seat Hamer Hall in the city, and then we pass through multimedia projections at the Biological Science Gallery.

We are offered a free light lunch to finish up, which is great because nearly three hours have passed and some kilometres walked, and I am faint with hunger. No one has asked a question about money the whole morning.

Leaving through the car park, I see the marketing director has a signposted parking space right next to the school director’s, and I weigh the heft of my nine glossy brochures.

A week later, I’m doing a tour of my local government high school, 15 minutes from home by public transport, compared to 65 minutes for the private option. While gleaming office towers and headquarters of multinational corporations flanked the 150-year-old school, this 57-year-old one is neighboured by small-industry and factory outlets: a budget auto repair, a timber and hardware wholesaler, and a steel fabricator. A boutique brewery might represent the first outlier of gentrification, but as I jostle to park among utes with tray toolboxes, I can see change will probably be a while coming.

The school’s patchwork of architectural styles maps a history of government building grants, while dozens of portables are stitched to the fringes with breezeways, windblown trees and native bushes. There is an oval as big as the private school’s, and the furthest ends of it seem vacant, with grass worn to hard earth in places. Four families wait at reception, including a woman in a hijab and another parent I know from the neighbourhood: a lecturer at the nearby university.

The principal gives a spiel about the school: in a traditionally working-class area but on the up, alongside local property prices. It boasts a 50:50 gender split in Year 7, a key sign of success in the inner city where girls are often siphoned off to single-sex schools. He is proud of students who did well in recent maths and science competitions, a debating team win, and a cohort of more than 40 Year 10s doing early VCE subjects. The school drama production was a local hit.

“Safety is our number one priority,” the principal says repeatedly, once even stopping the tour to make sure we hear this. “Your children will be safe at this school.”

I like safety but I wish he’d stop talking about it. It’s making me nervous, and I’m also sort of hoping for more than basic survival. There is a selective program, where bright kids are grouped in one class, and this triggers anxious questions from parents. How do children get chosen? What about the other kids? The principal says there’s a test, and assures us all children receive a suitably challenging education.

We pass hallways decorated with student artworks and a gay pride mural, and stop at classrooms where teenagers of every colour and cultural background roll their eyes and squirm at being put on display, which seems normal. We pass one Year 12 classroom where a boy and girl sit close in the back row with hands interlaced. They hastily move apart when the principal glares at them. We see the canteen, which has a special area for the baby Year 7s to queue (safety again), and we visit the music area, where students happily beat drums painted with the school’s initials, and it’s very loud. Hamer Hall will not be their performance venue; they’ll play the school gym or local civic centre. We visit an inviting library with walls of books, and walk over bitumen with faded hopscotch and four-square grids. There are low troughs with water bubblers, half of which I know will be blocked, and there are rickety metal lockers like the ones I remember from my own high school: dark little caves of private real estate.

At the end (no refreshments, but a merciful one hour instead of three) the principal turns his attention to the children in the tour group, who look alarmed at this development, and insists they each ask a question. Urged on by pushy adults, the children finally speak up. What sort of food is in the canteen? (Healthy food.) Do Year 7s get their own computer? (No, they use school laptops that stay at school.) Are there camps? (Yes, within Victoria; no mention of European music trips.) As we leave, the university lecturer says she likes it, and will send her son here.

A 30-year drift from public to private schools stopped three years ago, according to ABS figures, and last year 65% of Australian children were enrolled in government education. Families are looking with fresh eyes at the state high school down the road. There is no outback cattle station campus for the one I visited, but while waiting in my car to leave, I reflect that these students will do just fine without that Henry Lawson-esque experience. They will create their own, more urban, vision of life in Australia, before they grow up and meet their private-school counterparts in universities and workplaces. Who knows, they might even come back here one day and unveil a drinking fountain.

To read more on this topic:

How do I choose a school? Useful information for parents.

6 tips to find the right school

The recent decision by Facebook to block news pages means saw specialist education community pages linked to news organisations shut down. There are large communities of people interested in the education of young people – parents, grandparents, teachers and family members. We want the conversation to continue. We want you to be able to read the stories and be informed about all aspects of education and schools in Australia. Please visit the news organisation listed below to read the article in full and see more of their work.